Latest news:
You are at:Home»Conference»Annual Conference on Tuberculosis 2008 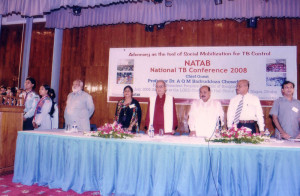 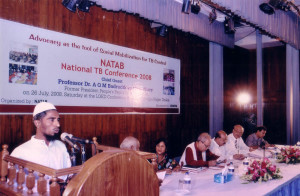 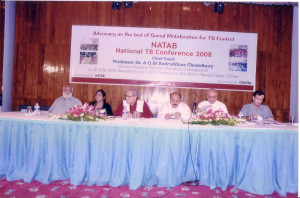 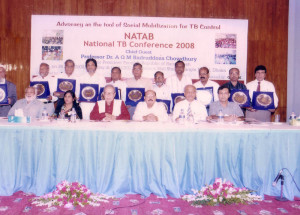 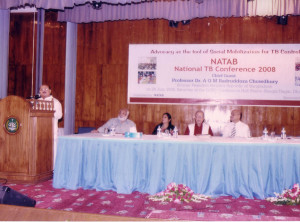 The National Conference on Tuberculosis 2008 was organized by NATAB to exchange information on social mobilization and to share experiences, technical information and strategies from the NTP to help achieve and maintain targets in TB control. Bangladesh is ranked in the top 5 highest TB burden countries in the world, and thus TB is a priority public health problem. Each year in Bangladesh 300,000 people are infected with TB and 70,000 people die from TB, equalling one TB death every 10 minutes. Bangladesh has made considerable progress in TB control over the last few years, largely due to the introduction of the DOTS strategy in 1993. The TB cure rate target was achieved in 2005 and case detection has dramatically increased but is yet to reach the national target. Much work needs to be done to maintain and increase the case detection and treatment success rates in this country. Success in this area will require continued and strengthened collaboration between government, NGOs and civil society. In addition, it is imperative that the root cause of TB and poverty be focused on; only by reducing poverty will TB be effectively and sustainably controlled.

The National Tuberculosis Control Program (NTP) aims to reduce morbidity, mortality and transmission of TB by strengthening TB control through partnership, resource mobilization, and ensuring quality diagnostic and treatment services. The NTP adopted the WHO­recommended DOTS strategy in 1993 and since then, case detection and treatment success rates have been steadily increasing and DOTS coverage has now reached 99% of the country. There are 5 components to the DOTS strategy: government participation, case detection, treatment, uninterrupted supply of medicines, and monitoring through recording and reporting. Numerous achievements have been made including: expansion of DOTS throughout the country, access to new funding sources, introduction and revision of various key guidelines, and awareness campaigns.

Diagnosis: three sputum samples required.
Treatment: fixed-dose combination tablets
Follow-up: one sputum sample
Side effects: most side effects are minor, and can be readily managed. However, if any major side effects occur, treatment may need to be stopped.
It is important to register all TB patients and cross-check information on TB register, TB treatment card and TB laboratory register. It is also important to use standardized quarterly reporting forms to submit data to NTP.
The key is to follow the NTP operational guidelines to effectively work towards improved TB control.

Dr. Md. Akramul Islam
BRAC had the following points on the DOTS expansion:

Over the last 20 years, BRAC has rapidly expanded its TB control activities, and has seen a steady improvement in case detection and treatment success in its working areas. The key reason for this is the use of Shastho Shebikas, female community health volunteers who, as part of their role, educate the community, detect possible TB cases and oversee the DOTS

treatment either at their own home or during home visits to infected clients. The use of volunteers to oversee DOTS has proven to be cost-effective (US$64 vs. US$92 in non­Shastho Shebika areas) and has reduced the time taken to diagnose TB positive individuals. Sputum is collected at outreach centers at the union level or Upazilla health complex, treatment is initiated by medical officers and followed up by the shastho shebikas. Treatment success in 2003 in BRAC areas was higher (almost 90%) compared to the national average (almost 85%). A fee of 200 Taka is taken from each client undergoing treatment; upon completion, the 200 Taka is returned to the client and 150 Taka is given by BRAC to the shastho Shebika as incentive.

Two key issues to address: link between TB and poverty, and link between TB and HIV. Civil Society Participation in Health Programs: New and Old Paradigms Successful TB control will not only come from medical management, successful civil society participation is also required. Ownership of TB control programs has to be placed within the community through engagement of various community groups like women, religious groups, household community leaders, youths, etc. Through this ownership, community members can create awareness, mobilize, conduct household visits and reduce stigma associated with TB. Successful collaboration is needed between formal health providers, community health agents (Le. community health volunteers) and the community as a whole.

The Urban Primary Health Care Project-I (UPHCP-I) was developed to improve the health of the urban poor by improving access and changing the way preventative, promotive and curative health services are provided. The UPHCP-I works in Dhaka, Chittagong, Khulna and Rajshahi and TB services are part of the Essential Services Package (ESP). Services are provided by NGOs and private practitioners; training is provided by the project. Health educators and community mobilizers identify new cases in the community and send to specialized paramedics/physicians for assessment; trained lab technicians examine sputum samples and follow-up is done by community mobilizers, health educators and counsellors. TB caseload has been increasing under this project, demonstrating its success, but there are also areas of weakness. Additional workload due to increased DOTS patients is difficult, for, already busy service providers, social stigma continues to be a problem in the community and among other patients attending health clinics, and only a few TB patients are willing to come daily for treatment.

Dr. Ferdousi Begum
NSDP spoke on Urban TB Control Program and expansion of its program with reference to TB control effort. Her views are summarised below:

NSDP is a USAID-funded consortium of 8 international NGOs works to enhance the quality of basic heath care at the clinic and community Ie.vel. Among other services, NSDP clinics and community health workers provide TB screening, diagnosis and treatment. Subsidized or free services are provided for the poorest of the poor. NSDP joined NTP in 2003, and now provides DOTS services at 54 clinics in Dhaka, Rajshahi, Chittagong and Khulna. 231 providers have been trained to provide TB services and 18 of the centers also provide

Dr. Bruce Currey
Consultant to the Community Hospital and a veteran development worker with plenty of experience working in Bangladesh had to say few things which might sound little off beat to some but demands serious considerations.

His view is given below for the readers to ponder: His presentation entitled Eight Ways to put the TB MDG Back on Track:

The TB MDG states to reduce TB deaths [not TB death rate]and prevalence of the disease by 50% by 2010. TB control needs to move beyond DOTS as DOTS tends to result in exclusion of the poor and marginalized. To achieve TB MDG in Bangladesh, TB control must become multi-sectoral (including nutrition, housing, socio-economic development, etc) and focus on the root causes of TB, in particular, on poverty reduction. TB is a disease of the poor and as such, all studies and interventions should be aimed particularly at poor and marginalized (malnourished, disabled, children, etc) groups. Focus should be on all TB cases and not only on sputum positive cases. Interventions should be community led and empower the community as this will ensure their success, particularly drug treatment success. An evidence base needs to be established that DOTS is not increasing MDR-TB. Community immunity towards TB needs to be restored (vaccinations, improved living and nutrition standards, etc); by being TB-aware, a community can become TB-immune. Community health workers do not only detects TB cases, they provide community-based care and as such, should be remunerated for all services. TB elimination needs to occur before HIV spreads in this country.

Dr. Md. Abdul Hamid Salim
Convenor, L TCC had the following points in his presentation on the activities, views and plan of the L TCC for leprosy and TB control:

When the Government of Bangladesh (GoB) initiated a new project to control leprosy in the whole country in 1993, the L TCC offered to work hand-in-hand with the government. A year after the GoB project started, a Memorandum of Understanding (MoU) was signed between the governments (GoB) and the L TCC to formalise the participation of NGOs active in the care of leprosy patients in the country in this national programme. There are currently 9 active NGO members with L TCC, covering 29 districts (out of 64 in total) and 4 urban areas. These are The Leprosy Mission (TLM), Damien Foundation, LEPRA, HEED Bangladesh (a local NGO), Rangpur Dinajpur Rural Service (or RDRS – a national NGO), Salvation Army, PIME Fathers & Sisters (Catholic orders), and LAMB hospital.

In his presentation he reminded the participants that 22 High Burden Countries (HBC) constitutes 85% of the TB burden in the world and 90% of TB deaths, and three of the five top burden countries are in South-East Asia, which has 36% of the global TB burden.

On TB Control Efforts Dr. Khurshid gave a run down on the major mile stones for TB control which looks like the following:

1991 Targets for TB control (World Health Assembly) was set.
In 1993 TB was declared as a global emergency by the WHO
Framework for effective TB control (DOTS) was proposed in 1998
Stop TB Initiative partnership to Stop TB care in place in 2005
Scaling up of DOTS was agreed till 2015
MDG set the target of 50% reduction in TB prevalence and death to have a sustained impact.

Dr. Khurshid also pointed out that to reach 70% case detection target, DOTS program should be expanded to private sector. Inadequate health infrastructure is a major issue for the developing countries to handle; while new phenomena like increased stigma in linking TBIHIV-AIDS needs to be addressed

He also suggests more careful selection of activities so that the TB control program does not get overburdened.

Good planning for acceleration of DOTS expansion is imperative while the plan needs to set appropriate guidelines for different aspects/fields in TB control: laboratory, treatment, PPM, TB in prisons, TB in the workplace.

ICDDR,B in his paper presented some of the findings from the prevalence survey in rural Bangladesh. A TB surveillance system was established among 106,000 people in Matlab. Trained field workers interviewed all the target people of 15 years or more of age to detect suspected cases of TB. People with persistent cough for more than 21 days were identified; sputum samples were collected and tested for Acid Fast Bacilli AFB. Of about 69,000 people persons interviewed 7.1% had cough for more than 21 days. Sputum samples were tested for AFB from 3,834, 52 (1.4%) of them found to be positive. The prevalence of chronic cough and sputum positivity were significantly higher in male than female. The population based prevalence rate of smear positive TB cases was 95/100,000 among persons aged 15 and more. Case of TB clustered geographically (relative risk equalled 5.53, 95% 0: 3.19-9.59). The high burden of TB among rural population warrants appropriate measures to control TB in Bangladesh; Dr. Zaman et al suggested.

Dr. Asif Mujtaba Mahmud
Asst. Professor in the NIDCH spoke on the Multi drug resistant Tuberculosis (MDR-TB)-Experiences in management at National Institute of Diseases of the Chest & Hospital (NIDC&H)

MDR-TB is a man made phenomenon due to ineffective administration of effective drugs.

To Combat MDR-TB he suggests to:
Conduct surveillance to determine patterns of drug susceptibility.
Ensure easy availability of second line drugs.
In his paper, he explained his experiences of managing MDR-TB patients since January 2002. Unfortunately, 3 patients (5.4%) died, another 3 (5.4%) absconded and 11 patients (19.2%) failed to convert after intensive phase of treatment. He recommended In Search of the reason for treatment failure we attributed to gustionable quality of drugs and suggested establishment of separate OT for MDR-TB patients; Drug resistance surveillance studies and studies on nosolacrimal spread to patients and health workers and on undiagnosed MDR-TB patients moving in the community.